Everything in Moderation: The cider side of sipping • Urban Orchard Cider Co.

Everything in Moderation: The cider side of sipping 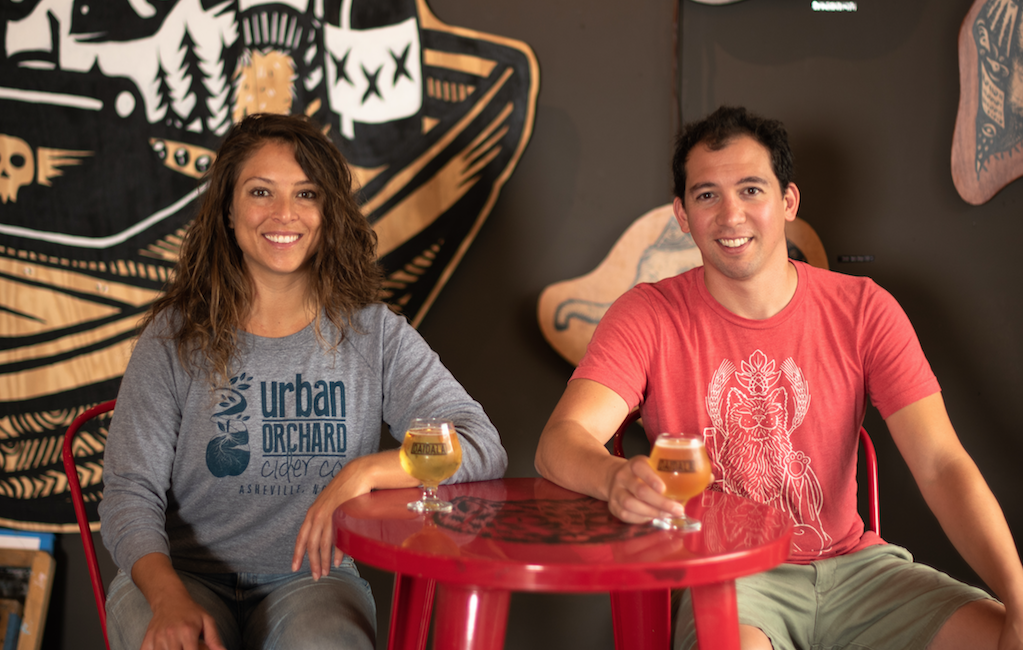 Give humans a fruit, vegetable or grain, and they’re likely to find a way to make booze out of it. The apple — a fruit that grows well in so many places around the world — is no exception. Cider, an alcoholic beverage made from fermented apple juice, has been produced since before recorded history began.

But like everything else in the world of food and drink, enterprising souls have refined and expanded the process to create cider on a larger scale. And with Henderson County’s abundance of apple orchards, Western North Carolina has proved an ideal location for a modern day renaissance of this ancient drink. The Hendersonville area accounts for a full 85% of the state’s apple production.

Today, there are nearly a half-dozen commercial cideries in or near Asheville. The area’s first, Noble Cider, opened in 2012 and began bottling its products for distribution by 2016. Bold Rock Hard Cider was launched in Virginia in 2012 and opened an Asheville cidery and taproom in late 2015. A smaller craft operation, Black Mountain Cider Works, also makes mead, a honey-based alcoholic beverage with a story of its own (we’ll cover mead in a future article).

More than a decade ago, Asheville native Josie Mielke was making cider at home with her then-husband, Shiloh, her dad and brothers. “As a gluten-free person, I drank my share of red wine,” she says with a laugh. “But we were looking for something with a lower ABV (alcohol content).” Cider typically comes in between 5% and 9% alcohol, roughly the same as beer. “But I don’t think we ever thought it would be a business,” she admits.

When Urban Orchard Cider Co. opened its production facility and tasting room in West Asheville in October 2013, space was tight. “Imagine production in a shoebox,” says Mielke. The recently opened South Slope location has allowed the cidery to expand its production significantly. “We’re doing around 30,000 gallons a year of finished product,” she says, noting that (theoretical) capacity is more than 100,000 gallons of cider annually.

But because Urban Orchard only works with locally sourced apples in season, production isn’t year-round. “We treat our cider more like wine — when the apple crop comes in, we start fermenting,” Mielke explains. “And when the apple crop is gone, we stop. So everything you’re drinking is actually last year’s crop of apples. We’re 100% Hendersonville apples.”

Urban Orchard features more than a dozen ciders, all aged at least eight months. Styles range from a straightforward Dry Ridge to the spicy and complex Sidra del Diablo, a sweet cider with prominent habañero and vanilla notes.

An unusual entry into the local cider scene is Daidala Ciders, Chris Heagney‘s one-man operation. After first tasting cider in the United Kingdom, he was hooked. Even after returning to the States and getting a job at a Connecticut brewery, he says, “I had cider on my mind the whole time.” At that point there were relatively few commercially made ciders on the domestic market, and most were overly sweet and undistinguished.

Heagney eventually got a job at Reverend Nat’s Hard Cider in Portland, Ore. “That’s where I learned the cider side of fermentation,” he says. He also developed a keen interest in experimenting with flavors. “Pushing the boundaries; that’s where I got to love creating fun ciders,” he says.

After moving to Asheville and venturing forth on his own, Heagney built Daidala Ciders around his “nomadic cidermaker” concept. “I lease space from other cider companies and work with them to collaborate on batches,” he says. “I have a recipe which they can ferment at certain temperatures and with specific yeasts for me.”

Beginning distribution in 2017, Daidala opened its facility to the public last year. The taproom doubles as a functioning art gallery — Andy Herod‘s art fills the space and adorns the outside of the building in the River Arts District. Herod also designs all of Daidala’s labels.

Both Heagney and Mielke agree that Asheville and its surrounding region is yielding some of the best cider in the country. “Because of the apple varietals that do well here in the Appalachian region,” Mielke says, “you’re going to get a very crisp, clean, apple-forward cider.”

And she says that works well with Urban Orchard’s approach. “Our mantra is to support local farmers and community while producing something that’s free of artificial flavors, colors, aromas and high-fructose corn syrup. We’re really just breaking it down to trying to have the most premium product that we can.”

“Creative ciders speak to a lot of people who are interested not just in craft beer, but sake, interesting wines and cocktails,” Heagney says. “I think as long as you’re making a really compelling product, people will be interested in it.”