An Apple Tree Grows in Asheville: Our State Magazine, The Best of North Carolina 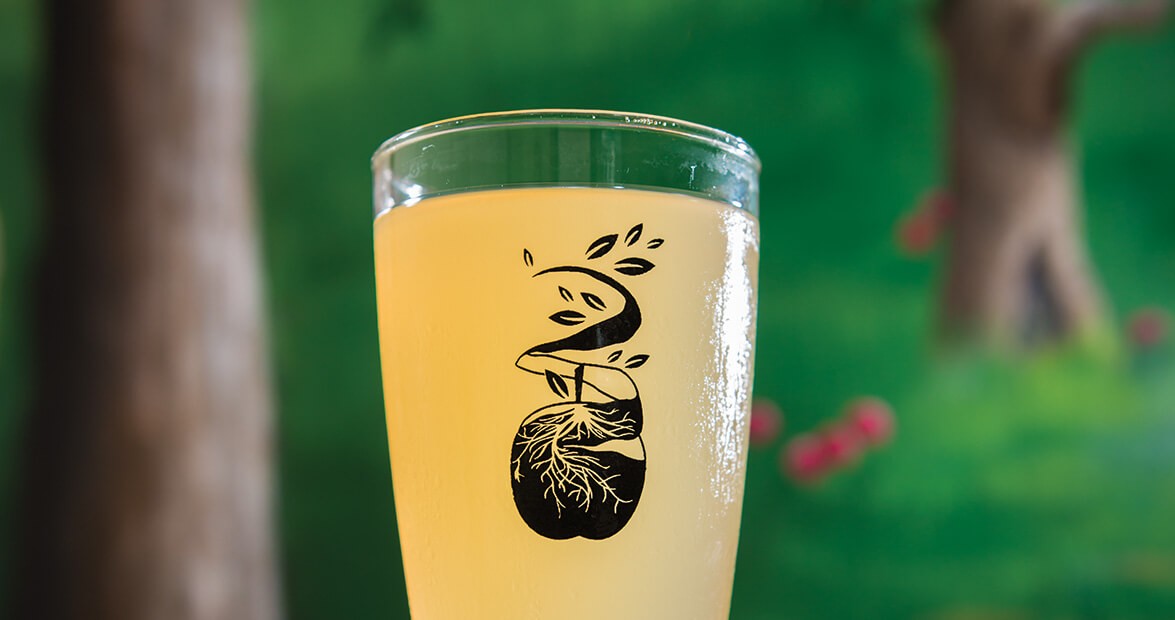 by GRAHAM AVERILL
There’s something odd about the portraits lining the wall behind the bar at Asheville’s Urban Orchard. The subjects in the paintings are familiar — famous historical figures like George Washington and Napoleon Bonaparte — but the faces are different.

“We Photoshopped our employees and owners in the portraits,” says co-owner Josie Mielke. “A lot of those people are my family members.”

The altered portraits are just one example of the “familiar, but different” approach Mielke has applied to her brewpub. At first glance, Urban Orchard, in hip and bustling West Asheville, could pass for any taproom in the city. Local art hangs on the walls. The cheese plate is all locally sourced. Young people lounge in hammocks in the backyard. You’ll find this scene at many brewpubs around Asheville. The difference? They’re not brewing beer at Urban Orchard. They’re brewing cider.

Growing by sips and gulps
Mielke and her husband, Shiloh, began fermenting cider at home several years ago, largely because they didn’t like the cider options on the market. “Back then, it was just big brands like Woodchuck or Hornsby’s, and none of it tasted like it was handcrafted,” she says.

What started as a hobby turned into a family business — Mielke’s husband, parents, and brothers are all involved — and that business turned out to be a trailblazer. Cider is booming, the fastest-growing segment of the alcohol industry. There are more than 400 cider producers in 40 states.

Even so, Mielke and her family have set themselves apart — few companies have opened a legitimate craft cider brewpub. You might find a tasting room attached to a cider house, but to have a pub dedicated to cider, with multiple taps and a rotating list of ciders, is rare.

According to Marketing and Creative Director Jeff Anderson, Urban Orchard was one of the first cider pubs in the country, and remains one of only a handful.

Singular ciders
Inside Urban Orchard, soft Edison bulbs hang from the ceiling, and industrial-chic stools surround a glossy wooden bar. Outside, a large deck leads to a grassy area, complete with cornhole boards and hammocks. On warm weekends, the backyard is packed with families, a few dogs, and drinkers looking for a cider oasis in “Beer City.”

When it comes to the ciders themselves, apple is, of course, the dominant flavor. And Urban Orchard produces a traditional cider called Sweet English. (“It’s sweet, but it doesn’t make you want to shave your tongue,” Mielke says.) But most of the taps yield more progressive ciders — Mielke experiments with different yeast strains to cultivate a range of flavors. She makes a dry, Champagne-like cider infused with ginger; a hopped cider with bitter, citrus notes; and a Belgian beer-inspired cider with flavors of orange and coriander.

And the cider in your glass is just the beginning. Across the street, Short Street Cakes makes a cider-soaked pound cake; farther up Haywood Road, Hole Doughnuts has made a cider-glazed doughnut. Mielke and Anderson actively seek collaborations like these. Their apples come from Hendersonville. The artist who painted the mural on the side of the building lives nearby. And the snacks on their menu are made with ingredients sourced in town.

“The business seems to fit Asheville,” Mielke says. “North Carolina is one of the largest apple-producing states in the country, and this community puts a premium on buying local. Cider is as local as you can get.”

This notion is guiding Urban Orchard’s growth. Mielke is experimenting with canning and working on distributing beyond Asheville. But she’s cautious about growing too fast, and wants to focus on quality over quantity.

Still, she believes there’s plenty of momentum left in cider’s boom. It’s an old favorite, after all. “A lot of people don’t realize it,” Mielke says, “but Johnny Appleseed was planting seeds to make cider.”

Next Post: Eat Sweet: A Roundup of Asheville’s Holiday-Inspired Treats