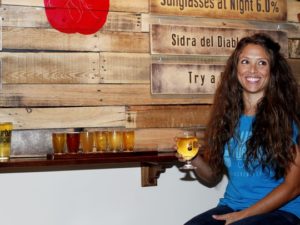 When Urban Orchard Cider opened about three years ago along Haywood Road in West Asheville, the beer scene that way was just coming together and groundbreaking hadn’t even started at the big New Belgium brewery only a mile away on the French Broad River.

Now New Belgium is turning out beer; another brewery, Archetype, is building almost next door to Urban Orchard and the street is buzzing with visitors. Meanwhile, Urban Orchard co-owner and cider maker Josie Mielke has settled into a comfortable groove and the taproom has just added a lunch service with sandwiches, salads and cheese pairings starting at noon. “Three years ago, we were running around like chickens with our heads cut off,” she said. “We were completely in start-up mode. We would bar tend and then make cider until 4 in the morning.”

Urban Orchard has become a West Asheville mainstay and has joined a booming craft cider scene that includes such producers as Noble Cider in Leicester and Bold Rock in Mills River. Urban Orchard is shipping its cider to more than 60 accounts, most of them around Western North Carolina. But it’s developing a market along Interstate 40 headed to Raleigh-Durham, Mielke said. “That will be our target market for our next expansion stage,” she said.

Mielke is one of the few women working in the local hard cider industry. But in the bigger brewing scene, which includes cider makers, a growing number of women are taking leadership roles, including Christine Perich at New Belgium and Leah Ashburn at Highland Brewing. She said the New Belgium project and Archetype Brewing are good for the overall scene. “Cider has not yet hit its peak,” she said. “There is room for growth in the market. It’s not consumed as much as craft beer.” Still, she’s not expecting to see cider makers equal in number to area breweries. “I don’t think if we had 30 cideries that everyone would last,” she said.